Spring in Denmark not only means longer and brighter days but also the beginning of the first “harvest season” for a globally-unique solar energy system. The 26,929m2 concentrated solar power (CSP) plant now provides the city of Brønderslev with sustainable heating, but it will also enable power production as an add-on to a biomass-fuelled organic rankine cycle (ORC) system scheduled for completion in the second half of 2017.

The CSP system, developed by Danish renewable energy specialist, Aalborg CSP, has been operational since the end of 2016, but it was not until the sun appeared high on the sky that it reached full capacity. For now, the 16.6 MWth solar energy system supplies heat to the district heating network, but it also intends to contribute to power production when a biomass-ORC plant goes operational later this year. This combined solution will be the first large-scale system in the world to demonstrate how CSP with an integrated energy system design can optimize efficiency of ORC even in areas with less sunshine. 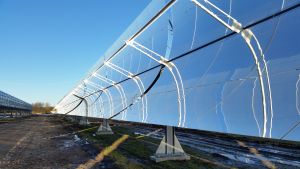 The solar energy plant is based on the CSP parabolic trough technology consisting of 40 rows of 125m U-shaped mirrors with an aperture area of 26,929m2. These mirrors collect the sunrays throughout the day and reflect them onto a receiver pipe, which sums up to 5 kilometre receiver tubes. This receiver pipe is surrounded by a special glass vacuum tube and inside this runs - only heated by the sun - thermal oil with temperatures up to 330 °C. This high temperature is able to drive an electric turbine to produce electricity, but the flexibility of the system also allows production of lower temperatures for district heating purposes. The solar heating system can thus alternate between providing combined heat and power at peak price periods, or exclusively deliver heat. On sunny days, the solar-thermal system is set to reach 16.6 MWth capacity.

The achievement of the world’s first CSP system combined with a biomass-ORC plant is supported by the Danish Government’s Energy Technology Development and Demonstration Programme (EUDP). The subsidy provides substantial support for technology development thereby making the Aalborg CSP solution more competitive in export markets, such as Germany, Austria or Italy that have a well-established district heating infrastructure or an existing base of ORC plants. While the prices of different types of fuel fluctuate, concentrated solar energy proves to be a stable and efficient renewable alternative in Europe.

Aalborg CSP was awarded the contract to develop and deliver the solar energy plant by the Danish district heating plant (Brønderslev Forsyning) in February 2016. Construction and installation of the system set records as it reached completion in just short six months. With the beginning of the Danish solar season, the CSP plant harvests the sun for district heating purposes but soon it will also enable electricity production, when the ORC plant receives inauguration in the second half of 2017.

Aalborg CSP is a leading developer and supplier of innovative renewable technologies aiming to change the way energy is produced today. Relying on extensive experience from some of the most efficient concentrated solar power (CSP) projects around the world, the company designs and delivers green technologies and integrated energy systems to lower the cost of energy for industries and power plants worldwide.

Aalborg CSP places strong focus on R&D activities and partners with knowledge-based companies and institutions to create leading-edge technologies. As a result, the Aalborg CSP engineering design is centred on a value-adding concept providing solutions that excel in operation, increase plant revenue and contribute to a greener future.

Headquartered in Aalborg (Denmark) and with sales & service offices in Spain, the US, Kenya, Uganda, Australia and Indonesia, Aalborg CSP has realised cost effective green energy solutions to a variety of industries worldwide.

Contact one of our offices worldwide to find out more about our technologies and our company.