The ability to store excess thermal energy generated by renewable sources, such as wind or solar, is becoming a crucial parameter in the continued green energy transition. Thermal energy storage is an important tool in securing a balanced energy system stabilising it against fluctuating imbalances between supply and demand.

Using molten salt to store excess thermal energy is a proven technology and the most widespread storage material in the commercial CSP industry and employed in both central receiver and parabolic trough plants. Aalborg CSP A/S has investigated the potential of using thermal energy storage as grid-based energy storage. Using molten salt storage tanks integrated with renewable energy sources such as wind and solar energy to replace the world’s coal-fired power plants is currently considered a highly bankable solution. The main advantage of using molten salt for this purpose, compared to other storage materials, is that the discharge is happening at a constant temperature.

The transition from coal to renewables can be accelerated by shifting the role of coal from providing base-load power to providing back-up power in order to control and stabilise the grid. Instead of using coal as the base load fuel, power should be stored in molten salt during periods of surplus electricity in the grid and discharged, when the green energy supply is low, and the electricity demand is high.

Replacement of the existing coal-fired boiler plants can be achieved through a gradual phase-out based on recycling. Only the boiler, coal- and flue-gas cleaning and handling-systems will be discarded. Remaining parts of the plant’s existing infrastructure can be re-used in its original form and position. This includes components such as steam turbines, generators, condensing heat exchangers and water treatment equipment plants, as well as high value components for switching, transforming and transmitting high voltage power.

To facilitate a complete replacement of a coal-fired boiler unit, an electric heated molten salt heater and two molten salt storage tanks with integrated steam generation systems must be installed.

To make the business case even more feasible, the system can be expanded and integrated with other types of plants resulting in the creation of an ‘energy factory’. It is possible to integrate the existing plant with: 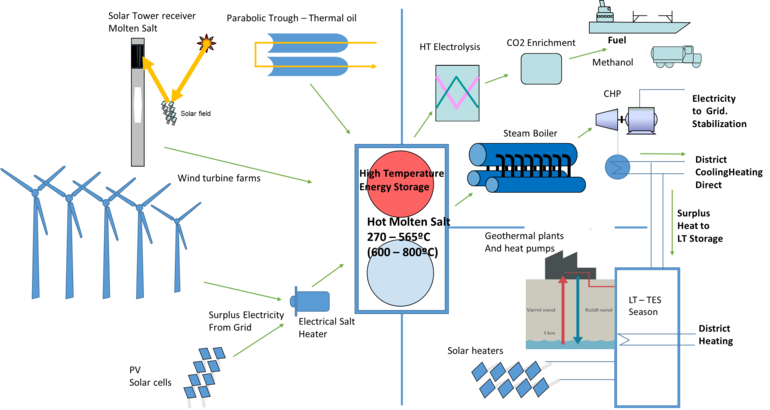 that Aalborg CSP has so far delivered more than
1,700MWth solar installations globally?

Contact one of our offices worldwide to find out more about our technologies and our company.